Archive For The “Billy Boyko” Category

During the football season, I’ve gotten in the writing habit of picking a “Sunday Word”, and using it to describe what happened the previous week.

I’ve been slack in getting this going this preseason, but the only possible word that can perfectly summarize this Lehigh football offseason is “pro“.

The NCAA’s big ad campaign for years now has been that “most athletes go ‘pro’ in something other than sports”.  And for the great majority of Lehigh athletes, year-in and year-out, this is still true.

But this offseason we’ve seen an unprecedented number of Lehigh athletes trying their hand at ‘pro’ ball – and Lehigh fans everywhere couldn’t be more thrilled or excited.  There are a lot of “pro” adventures to follow for Lehigh fans right now, and it’s damned exciting stuff.
Read more »

Lehigh In the NFL Preseason: Your Weekend Guide

It may be 21 days until the start of Lehigh’s football season, but there’s plenty of football on TV for Lehigh fans to get excited about tonight.

For all the information you need on catching LB Billy Boyko, OG Will Rackley and WR Ryan Spadola this weekend, just check below the flip.

Some spend it in celebration with friends in the city, or surrounded by family at home.  Some of the big names have the cameras embedded with the players, awaiting with baited breath their reactions, or their expressions of relief.

But LB Billy Boyko didn’t do much different than he does many weekends.

“Boyko, the all-league linebacker from Northampton, spent Saturday working on cars at Maple Grove Raceway,” the Morning Call reported, “where his family is immersed in the drag racing scene.”

Working on his father’s dragster during “the season opener of the Sunoco Race Fuels Money Trail,” a release from the Maple Grove Raceway said, he “kept two cell phones in his pockets at all times,” awaiting the call from his agent about a possible late round draft pick or a late free agency pickup.

Saturday night, the phone rang with a call from the Raiders.
Read more »

When you study “The Rivalry” as long as I have, the overall trends of Lehigh students, Lafayette students, the football players, and the citizens of Bethlehem and Easton break apart, and the individual stories from each specific instance come to the fore.

Specific “game to end all games”, detailed game riots,  freezing games, or unusually hot games get broken out, sometimes breaking from the normal expectations of The Rivalry in general.  The Rivalry endures, and there are similar stories of seasons being made, or broken, or riots, or order, but occasionally games do have variation.  Not every Rivalry game is the same..

The story of the 148th meeting of the most-played rivalry in all of college football is probably more different than anyone might have ever imagined before the season. 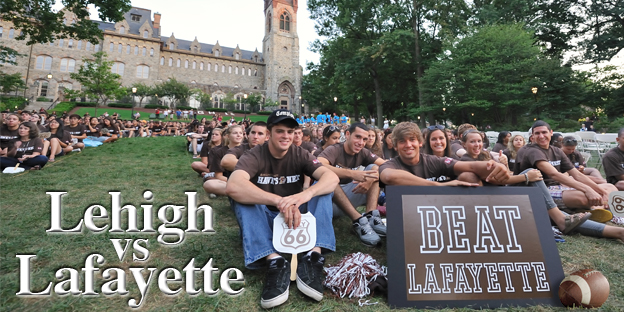