Archive For The “Dave Cecchini” Category

Five Things to Watch, Keys To the Game, Fearless Prediction: Lehigh at Bucknell, 11/9/2019 We’re going to try something different this week.  No, don’t worry, we’ll still break down this week’s game and everything, but we’re just going to make it it quicker and a lot easier to read.

You can read College Sports Journal’s preview of the game here, and my mostly-football-free “Tailgate Report” here.

Below, we’re going to do a quick once-over of Lehigh’s game notes and possible injuries, then we’ll dive right into 5 things to look for with Bucknell, my Keys to the game, and the cherry on top will be my Fearless Prediction.

I called this game a “Family Reunion”, thanks to all the coaching links between Tom Gilmore, Dave Cecchini and the makeup of both coaching staffs, and in Keith Groller’s preview of the game in The Morning Call, he and Gilmore went into even more detail.

“It has been a long relationship,” Gilmore said of Cecchini. “I coached Dave’s younger brother, J.T., at Dartmouth in the mid-1990s. I coached at Dartmouth when Dave was still a player at Lehigh. Then I came here and we coached together and then he went to Harvard and I went to Holy Cross and competed against each other there up there. Then we competed again when he came back to Lehigh and I was still at Holy Cross. He did a very good job when he came back here.”

If you’ve been following my Twitter account, you might have caught some “possibilities” as Lehigh’s next head football coach like Lou Holtz, Brett Favre and Bo Pelini.  The chance that any of those three guys actually are offered and accept the Lehigh head coaching position are somewhere between zero and zero.  (The full list of my Twitter “possibilities” are all on this thread on the Lehigh Sports Forum.)

I’ve come up with a list of fifteen possible names, some which I’ve heard whispered as candidates, others which might be good fits at Lehigh for a variety of reasons.

UPDATE: I have found five more names of possible head coaches that I am adding to this list below.

Who are the twenty people?  Here they are, in alphabetical order.
Read more » 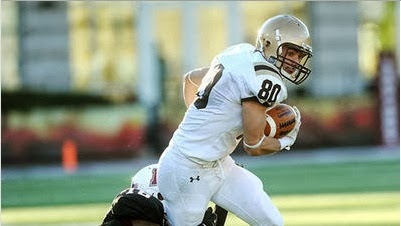 Bialkowski and Kurfis Ready To Step Into Big Shoes

Being a new Lehigh quarterback or wide receiver is no easy task.

Your athletic director, Joe Sterrett, is a former star quarterback for Lehigh.   Think he’s invested in the program?

Your receivers coach, Dave Cecchini, was a star member of head coach Hank Small‘s “Air Lehigh” teams of the early 1990s.  Now he works every day with members of the offense.

Your recently graduated receiver, WR Ryan Spadola, will be lining up for the NFL’s New York Jets on Sunday.

Every day each Lehigh quarterback and receiver sees Lehigh Hall of Famers all over the place – something that might be intimidating to some.

But not senior QB Brandon Bialkowski and senior WR Lee Kurfis.  They clearly embrace challenge of stepping into those shoes.

When I asked Brandon what we should expect this Saturday in his first ever start, he responded simply.  “Expect Air Lehigh to be back,” he said.
Read more »

The analogy is not perfect.

When WR Wayne Chrebet came to Jets training camp in July of 1995 as a free-agent signee, the 5′ 9 1/2 inch tall athlete from Hofstra was turned away by the security guard, thinking he was “just another Hofstra kid” trying to sneak his way in to see some of the big stars training in Hempstead, Long Island, like QB Boomer Esiason or LB Mo Lewis.

WR Ryan Spadola, too was a Jersey resident.  He, too, came from an FCS school, a I-AA school.  But nobody turned the blond-haired, 6’3 Spadola away at the gates of SUNY Cortland, even if the Jets depth charts had his name written in pencil rather than Sharpie, down at the very bottom, just like Chrebet years ago.

When Chrebet reached out to Ryan to talk pointers on Jets training camp, it wasn’t just an email conversation between a legendary Jet and a rookie still learning the ropes.  It was also a bridge between two powerful Northeast football programs in the mid-1990s, Hofstra and Lehigh, at the I-AA level.

It wasn’t a perfect analogy.  But it was still a pretty damned good one.
Read more »