Archive For The “Hunter Kiselick” Category

With Tremendous Confidence, Lehigh Pulls Away Big In Second Half To Beat Georgetown 35-3 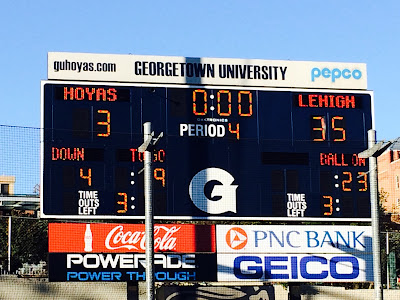 Sure, Lehigh had outgained Georgetown 220-64 on offense up until that point.  Definitely, the Lehigh defense, which has been playing with a chip on its shoulder for most of the entire season, was playing, as they say, lights-out, and they had just come up with a big defensive stop in the red zone to keep Georgetown from cutting it from 14-7 rather than 14-3.

But a batted ball at the line of scrimmage, alertly grabbed by DE Hoya DE Hunter Kiselick, made it feel like the Mountain Hawks might rue the opportunities they had in the first hald to put away Georgetown.

After coming in for injured senior QB Nick Shafnisky, sophomore QB Brad Mayes jumped right into the fray and finished the scoring drive with a perfect pass over the middle to junior WR Troy Pelletier to make the score 14-3 Lehigh.

But after a drive that went backwards and that interception, it was Georgetown that had momentum going into halftime, and they were getting the ball back as well.

That’s when the Mountain Hawks, who have defined this season so far as being a second half team, put the game away resoundingly.

“I’m pleased with how the kids responded at halftime,” head coach Andy Coen said after the game.  “It wasn’t very pretty on the offensive side on the offensive side of the ball in the first half.  The staff did a great job, got the kids rallied around, made a couple different turns of the wheel, so to speak, and really got the thing running again.
Read more »

Georgetown is a football school, of course.  But you may have heard that they also play basketball at Georgetown, and this Friday is a huge deal on campus: Hoya Madness.

“The Georgetown University men’s and women’s basketball programs will hold their annual Hoya Madness celebration, the official on-campus kickoff party of the 2016-17 basketball season, on Friday, October 14 at 8 p.m. in McDonough Arena,” the release states.  “This is a free event open to all Georgetown students. Doors are scheduled to open at 7:30 p.m., with the show kicking off at 8 p.m. and running until 9:30 p.m.  The first 1,000 students in attendance will receive a custom ‘Hoya Madness’ Jordan Brand t-shirt.”