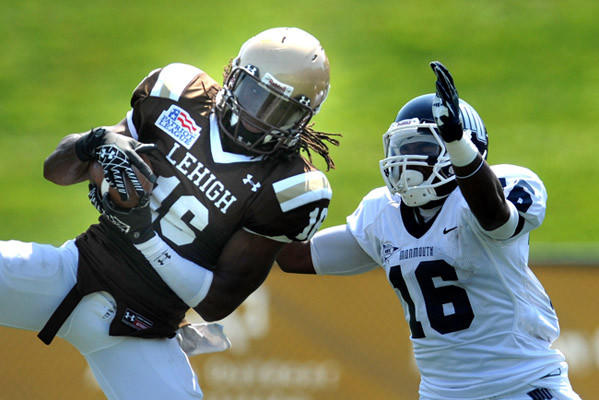 The TV broadcast team of Mike Zambelli and Mike Yadush sounded out the alarm early in Saturday's game.

After the Mountain Hawks had jumped to a 7-0 lead and smashed the Monmouth offense in the mouth in their first possession of the game, Lehigh resembled in every way a team that deserved to be ranked the No. 11 in the nation.

But Yadush, a member of the Lehigh linebacking class of 1993, had seen similar efforts before in the many Lehigh games he's covered and the many football games he's been a part of.  He saw what might happen, and he let the viewers know.

"College football games are long games," Yadush said.  "And sometimes things that go right early don't go right as the game goes on.  You take the brand-new starters out there.  And right now, they're thinking, 'Man, this is easy!'  But you have to keep battling every play.  Plays are six seconds.  You have to bring it hard every play, because you never know."

Lehigh would jump to an early 14-0 and 21-7 first-half leads on the scrappy Monmouth Hawks from the NEC, but anyone who came to Murray Goodman in the 90 degree heat expecting a shootout instead got something else.  They saw a defensive struggle in the second half that saw Lehigh squeak out a 27-17 victory - and very nearly were defeated in the home opener.
Read more »