Archive For The “2016 Schedule” Category 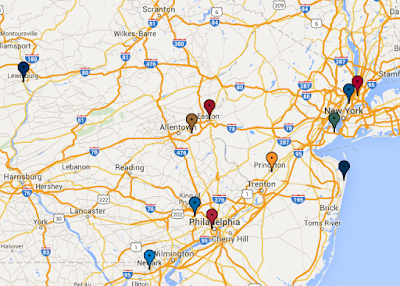 As we hit the 92 day mark before the 2016 Lehigh football season officially starts, it’s time to take a look at the overall schedule – and opponents – the Mountain Hawks will be facing.

Every Lehigh football fan knows that their Rival of Rivals, Lafayette, is only 18 miles away from Bethlehem.

What fans may not know is that, by drawing a circle around Lehigh on Google Maps, you can surround seven of the Mountain Hawks eleven 2016 opponents.  (The site NCAA Savant has an interactive, zoomable map that shows the schools quite clearly.)

The only FCS programs within the circle that Lehigh doesn’t play are Delaware, Wagner, and Columbia.

Lehigh will be hosting Monmouth, Bucknell, Fordham, and Princeton, all of whose fan bases are within two and a half hour’s drive, and will have “road trips” to Penn, Villanova, and Lafayette, which couldn’t be easier for Lehigh football fans.

However, if you wanted to earn frequent flyer miles supporting Lehigh football, you had better hope the Mountain Hawks make the FCS playoffs.
Read more »