Whenever I need to get caught up on Georgetown, I always check the Hoya game notes and athletic site, of course, but I also, always, check out DFW Hoya’s site on Georgetown football for his in-depth analysis and breakdown of the Hoyas.

His site was one of the few sites talking about FCS football at all when I started doing this Lehigh Football Nation thing at the very beginning, and his site has always been an inspiration – and I don’t toss that word around lightly – to what I’ve wanted LFN to become.  As a fellow website-master, I know how much work it takes to do previews and games, and I appreciate it.

In his preview could be the stat of the season for Lehigh.  As a Hoya fan, he looks at this season as Georgetown’s best chance to beat Lehigh since the Hoyas joined the Patriot League.  He also said this, which is true:

“The Engineers are a woeful 4-22 in two PL games converting on third down. Lehigh should do somewhat better in this one, but their gains on second down figure to be just as, if not more, important, when short yardage options become more plentiful. Defensively, Lehigh allows 55% of third downs, something Georgetown must take advantage of.” The Lehigh football team is lucky.

For most football programs and a whole lot of Division I football players, the end of the season is visible.  Many seniors see their final games at home, “senior day”, and maybe a road game or two to play their final games as seniors – that is, if the coaching staffs haven’t already started looking forward to the 2015 season and figuring out who is likely to start next season.

But with the Mountain Hawks, who essentially are eliminated from any Patriot League championship consideration with their loss to Fordham last weekend, there is always the week before Thanksgiving.

Because for Lehigh players, there are three championships every year.

The first two, the FCS National Championship and the Patriot League championship, are not in the cards this year.

But the third championship most certainly is.
Read more »

How to Catch Fordham at Lehigh 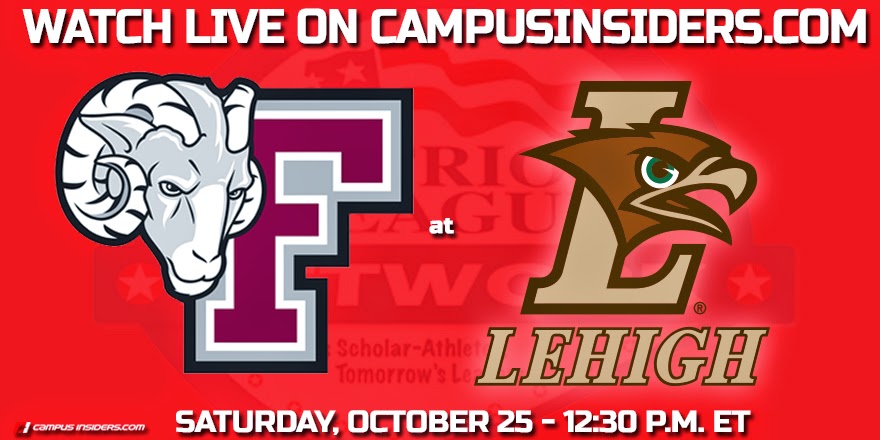 Oh, OK, so I finally accept that you can’t attend the game.  In that case, if you’re in the Lehigh Valley, you can catch the game in its regular place on Service Electric 2 Sports. with Mike Zambelli, Mike Yadush, and Al DiCarlo on the call, and on the radio on AM 1230/1320 on Lehigh Valley ESPN Radio, featuring Matt Kerr, Matt Markus, Tom Fallon and Lance Haynes.

You can also get a live video stream of the game online on Campus Insiders from the link here.  Their broadcast team will be Ray Crawford, Doug Chapman and Rich Cirminiello.

What do you do when nobody believes in you?

I feel like though life, people are constantly telling you what you can’t do.  Even when people say that you can do something, they don’t really mean it – in their eyes, they feel like you can’t.

Everything good that’s happened to me in my life came from holding my dreams close, not allowing other people to define for me what my dreams are, can, and can not be.
Read more »

1 on 1 With Brandon Alston

Lehigh Hoops Nation, as part of the continuing effort to get everyone prepared and ready for the ’14-’15 edition of Lehigh Basketball, was fortunate enough to chat with freshman guard Brandon Alston. This Q&A should help Mountain Hawk fans get to know Brandon. Special thanks to the freshman guard from Virginia for sitting down to…

This weekend’s Lehigh/Cornell game, if you’re not able to make it to Ithaca, will be available to be viewed online, but it will require a subscription and a fee to do it.

It’s available to on the Ivy League Digital Network, and you can buy it on a school day-pass basis.

I forget the price of Cornell’s day pass, but if you went for the monthly subscription to ILDN back when we played Yale, then you’re good for this weekend’s game at Cornell.

The game is Lehigh’s latest start of the season, at 3:30 PM up in Ithaca.

My plan is to can listen to the game for free on www.espnlv.com (or on the radio at AM 1230 and 1320 of the Lehigh Valley).  The reassuring voices of Matt Kerr and Matt Markus will be on the call.