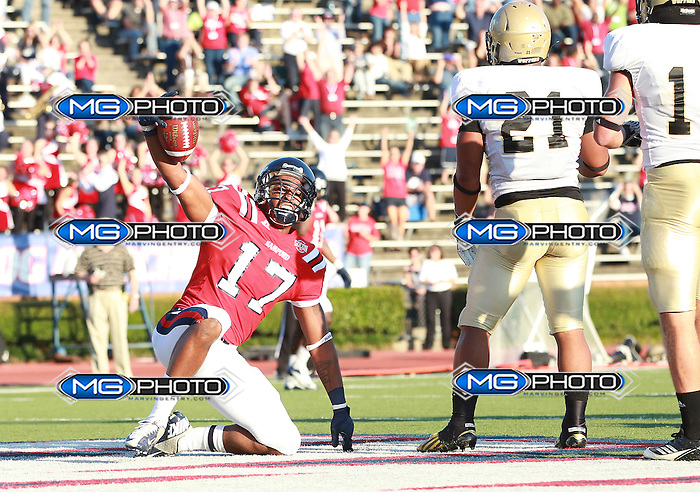 But first, check out this great picture from Samford WR Chris Cephus after scoring a touchdown in the Bulldogs’ 34-27 win over the Wofford Terriers this weekend.  (Photo Credit: Marvin Gentry/MGPhoto.com)

In the SoCon, this game was huge, but what was especially amazing was that the Bulldogs overcame four turnovers, including one interception that was returned by Wofford LB Alvin Scioneaux for a touchdown.

But with a smothering defensive effort from Bulldog LB Jaquirski Tartt (17 tackles) and a big day returning the football by RB Fabian Truss, the Bulldogs moved to 4-0 in SoCon play and put themselves in the drivers’ seat in regards to qualifying for the FCS playoffs.
Read more »

It’s that time of the week where I share with you your weekly Lehigh fan viewing guide for Week 9 of the college football season.  Why go to website after website when all the information you need is right here?

If you are not able to attend the game this weekend at Bucknell you can follow the game from the following sources:

When most people think of Bucknell, they tend to think of basketballs, not footballs.

Part of that comes from their upset of Kansas in the NCAA Tournament, the, um, SECOND most talked-about Patriot League upset over a legendary hoops program in the NCAA tournament.

But that’s not to say that the folks down Lewisburg way don’t care at all about football.

If there is an underrated stadium in the Patriot League it’s Christy Matthewson Stadium, named after the hall-of-fame pitcher.  Built in 1924, it was originally named Memorial Stadium to honor all the Bucknellians who had “fought in war”, either the Civil War or World War I, and had a “Christy Matthewson Memorial Gateway” in the front to honor the late pitcher, who had recently died from tuberculoisis complications stemming from his time in war.

While Lewisburg isn’t, shall we say, a metropolis, it’s not out of the realm of possibility that the stadium, which seats 13,100, could approach sellouts once again if Lehigh, Lafayette and Bucknell could both be in the title hunt at the same time.  The Bison have proved this with Sojka Pavillion, as their establishment of a perennial mid-major powerhouse in hoops have provided lots of sellout crowds.
Read more »

“After the halftime speech, this team pulled together and had the will to win this game. They overcame their mistakes. They got back down to it, and did what they needed to do to will this game into the win column. Players stepped up and made plays. Others shook off a rough first half and really stepped up in the second to show the nation what they are capable of doing.”

No, those aren’t the words of the Sunbury Daily Item sportswriters after Bucknell’s 17-14 win over Dartmouth this weekend.

This was a part of my “Sunday Word” after Lehigh, back in 2010,  rallied from a three-score deficit to beat Harvard, 21-19 and – in retrospect, a sentiment shared by myself and head coach Andy Coen, for starters – kicked off the amazing success on the field that the Mountain Hawks have enjoyed ever since.

It’s too early to say yet if Bucknell’s win, where the Bison defense shut down the Big Green and allowed the Orange and Blue offense to score 17 unanswered points, will have a similar effect on the guys out in Lewisburg, PA.

But there’s some indications out in central PA that the Bison are starting to put things together. 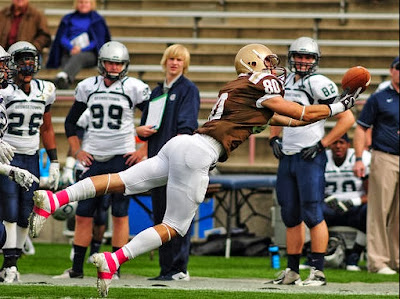 Grambling Forfeit and Protest Puts Spotlight On Plight of HBCUs

If you’re reading this blog, chances are you’ve enjoyed some college football at some point during this 2013 season, either in person, at an FCS school like Lehigh, or maybe on TV, watching someone like QB Johnny Manziel play in front of 100,000 stadium fans.

If you’re like most casual fans, though, you don’t think about the number of days it takes for these players to get to gameday and to compete: hot practices in the summer heat, countless hours in the weight room, the training regimen it requires.

This last week, student-athletes at a very small Division I university in Louisiana had looked around at the environment surrounding themselves in regards to their program and facilities and said: enough.

Grambling’s situation this season, which led to the strike that caused them to forfeit Jackson State’s homecoming game last weekend, is a complicated one.  It’s hard to summarize neatly in 500 words or less.

1 on 1 With John Ross Glover

Lehigh Hoops Nation, as part of the continuing effort to get everyone prepared and ready for the ’13-’14 edition of Lehigh Basketball, was fortunate enough to chat with forward John Ross Glover, a transfer from Lipscomb. While he has to sit out this season due to transfer rules, this Q&A should help Mountain Hawk fans…