Archive For The “Beau Bosch” Category 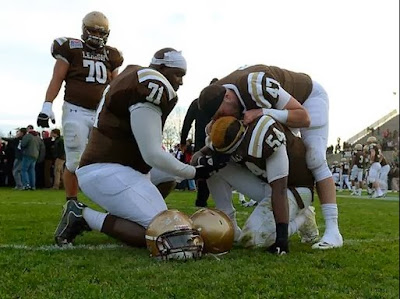 Senior OL Zach Duffy could have chosen to talk about any number of career highs when he reflected this week in The Brown and White about his time as a football player at Lehigh.

He could have talked about building the program up from a 4-7 team into a Patriot League champion, crushing the sweet dreams of Lafayette last year in Easton in the 152nd version of The Rivalry, 45-21,
or perhaps he could have waxed philosophic about the last time Lehigh squared off against Lafayette at Murray Goodman Stadium, the time when QB Nick Shafnisky threw aside a Lafayette defender and the Mountain Hawks blew the doors out with a 49-35 win.

But that’s not what he talked about at all.

He went right at the “agony of defeat” moments instead, talking about the loss to Lafayette in 2013, the infamous “it’s supposed to suck, and it’s supposed to hurt” game where an 8-2 Lehigh team faced off against a 4-6 Lafayette squad that ended up going to the FCS Playoffs with a 5-6 record.

“We had come into that game 8-2 with some momentum,” Zach wrote.  “We knew Lafayette was a tough team, but we didn’t respect them because we thought they couldn’t be tougher than us.

“[And after the loss,] I had no option but to stagger through the families consoling our seniors because they would never play football again. I watched grown men cry because they’d never again make a game-changing play, score a touchdown or deliver those big hits we love on defense. We saw their faces, and we felt their pain. Not only were their careers over, but we also lost the Patriot League Championship to our archrivals.  Now, four years later, we’re in a similar position.”

Lehigh has played three Rivalry games since that 2013 meeting, but none of them technically had the Patriot League Championship – and an FCS Playoff berth – on the line, because Lehigh had wrapped up the autobid and no worse than a co-championship going in.  In 2013, the Mountain Hawks had everything to play for, and lost, and this season, in 2017, Lehigh is in the exact same position.

And that’s both exciting – and terrifying.