Archive For The “Rob Holloman” Category 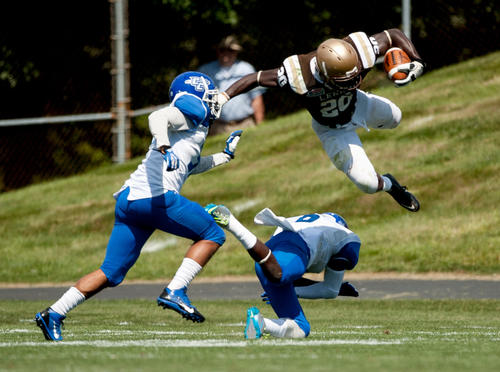 When you’ve gone to a lot of Lehigh games as I have, it’s easy to fall back on “memories” (today’s “Sunday Word”) to try to describe the action.

In a game which pretty much defied description overall, perhaps it was a requirement.

Sure, there hasn’t been a game in recent memory – certainly not in the Andy Coen Era – that featured a starting quarterback for Lehigh with less game experience than senior QB Brandon Bialkowski last Saturday.

Can you remember the last time Lehigh had eight departing seniors on defense to replace?  I can’t, either.

Yet even with all the new faces lining up for the Mountain Hawks, it was easy to see this performance alongside some of the greats in Murray Goodman history.  I mean it.  It is game one, a fact I haven’t forgotten, but I’m willing to bet that through time, this one is going to rank up there in terms of “memories” for many.
Read more » We break down the Central Connecticut State game – and we give our fearless prediction, below the flip.Just as I was going to write a nasty-gram about CCSU's penchant for releasing their game notes in the dead of night, their game notes finally did…