Archive For The “Terez Owens” Category

There have been other November football matchups over the last three years that have been big games for the Brown and White.

There were two “thrill of victory” games in 2010 and 2011 against Georgetown, which wrapped up a share of the Patriot League title and also clinched an autobid to the FCS playoffs.

There was also an “agony of defeat” game against Colgate last season, too, where the Mountain Hawks lost everything: an undefeated season, a Patriot League championship, and even a spot in the FCS playoffs with their 35-24 loss to Colgate, despite a 10-1 overall record.

Those games, however, don’t hold the same level of intrigue as the one this weekend against Holy Cross.

In all three of those November games in prior years, the Mountain Hawks were not only riding big winning streaks, they were also relatively healthy.

This time around, though, the Mountain Hawks need to turn things around after suffering their most lopsided  loss to Bucknell since 1966, and – adding injury to insult – seeing senior QB Brandon Bialkowski lost for the year with a broken collarbone.

It’s the most uncertainty on the Lehigh sideline in a November football game in a long time. 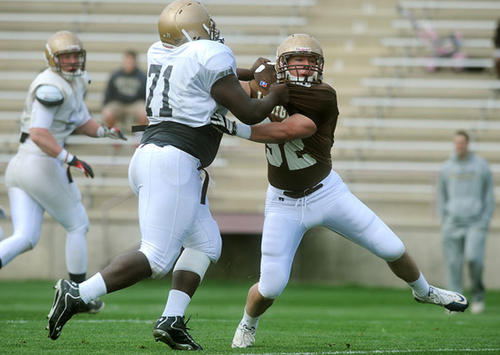 Today, we cross the threshold to 71 days until the beginning of the 2013 football season.

At no. 71, we find sophomore OL Terez Owens as our highlighted Lehigh football athlete in today’s countdown.